My recommendation for good business podcasts

My recommendation for good business podcasts

Podcasts are a great way for listeners to seek out new knowledge, and more companies are using podcasts to communicate more personally with their stakeholders. It also makes the medium a logical choice when it comes to brand marketing and pushing their vision and knowledge to a wider audience.

The huge interest in listening to podcasts has resulted in a huge variety of options, which can be confusing to navigate. To save you from having to dig through the deep sea of business podcasts, I've compiled the business podcasts that I find most insightful and inspiring. 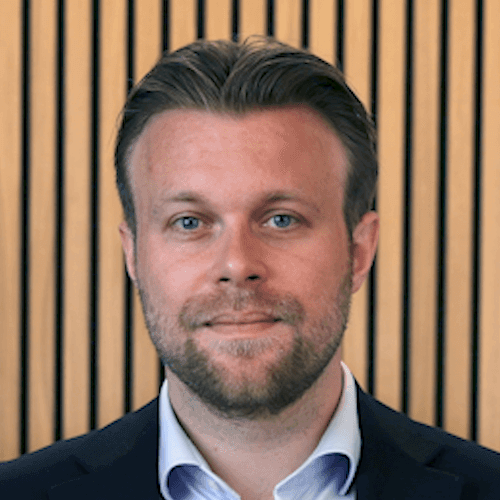 In this podcast, hosts Gael and Mark go in-depth on SEO and affiliate marketing. They give advice on how to build affiliate sites with SEO traffic as well as how to optimize your content or product's chances of being found on various search engines. Gael & Mark also work on various sites themselves, from which they bring their own personal experience that you can implement into your own strategy. The podcast is particularly relevant for those who are interested in building a website or, who are already working with SEO and thus would like to expand your skills.

In this podcast, Eric Ziengs interviews experts in a specific area of marketing including Facebook, Twitter, Instagram, LinkedIn, conversion optimization, sales funnel and more. Along with a guest, Ziengs provides concrete input that can help make your job easier. The podcast is for those interested in how online marketing works and how you can implement it into your current business strategy.

Google AdWords experts and Google Partners Chris Schaeffer and Jason Rothman talk in this podcast about PPC, Google Ads, online marketing, and how to effectively advertise your business online. The podcast is designed to help business owners, digital marketing agency employees and PCC freelancers get the most out of their Google Ads budgets.

Although we may have different roles at work, stress and breakdown can affect us all. In this podcast, organisational psychologist, Adam Grant, gives refreshing interviews on topics such as 'Breaking Up with Perfectionism' and 'How to stop languishing and start finding flow'. Learning to balance your work with your daily routines can help you optimise your potential, and in doing so Grant offers ways to enjoy the work part of your life.

Tips for a good and inspiring working environment

Tips for a good and inspiring working environment

What is a good working environment?

This includes the physical work areas, the office lighting and indoor environment, as well as the relationship with colleagues, management and workload. A good working environment therefore depends equally on a good and stable corporate culture that can help to promote individual well-being and productivity, and the overall health of the workplace, which includes positive interdepartmental relationships, supportive management practices and a manageable workload.

My 7 tips for a healthy work environment

A good working environment depends on both the formal and informal structures that define the workplace. To help you consider both sides of the business, I've put together my top 7 tips for creating a healthy working environment:

As mentioned above, there are several tools that can be used to strengthen collaboration in your workplace. DISC analysis is a relevant profile tool used to assess personality, behavioural and motivational factors. It consists of a series of questions that then divide respondents into four main personality types: dominance-seeking (D), influence-seeking (I), stability-seeking (S) and competence-seeking (C).

The analysis seeks to make your team more aware of how to use each other's differences to strengthen collaboration and overall performance. It's about making the workplace's different personalities complement each other.

This is what we do at Webamp

At Webamp, I have focused on creating an informal workplace where creativity, trust and freedom to shape the work and agenda are part of everyday life. We have many different personalities, so it's important that we take the time to make sure everyone feels comfortable and heard. We make it a priority to include initiatives that promote personal wellbeing and professional development, which has ensured a strong company culture where everyone values each other and their differences. Read more about my digital marketing agency, Webamp.

Book me for a talk on well-being at work

My journey as an entrepreneur has taught me a lot about business culture, entrepreneurship, management and marketing. If you and your company are interested in booking an inspiring talk about company culture and how to create a good working environment, please feel free to contact me. While you look forward to the next talk, you can listen to exciting conversations about entrepreneurship, management and company culture in my business podcast, The New Standard, on either Spotify, Apple or Podimo.

WOW! WHAT A HONOUR!
I just received the news that I am selected for this year's Forbes 30 Under 30 - Europe.

So proud to be on this list alongside so much amazing talent.

Thank you to the Forbes team for the recognition.

The WORST advice I've ever been given: 'Age matters'. This advice came from a boss when I was 23 years old.

Today I can look back and think that it was actually the most important piece of advice I ever received.

Because not only was it one of the reasons I threw myself into the entrepreneurial life and started Webamp - it also helped remind me of the management philosophy I wanted to stand for.

That's why it's a huge honour to be included in Berlingske's Talent 100 2021, because it's recognition that my mantra holds true.

A huge thank you to Per Skov for the kind words and inspiring mentorship, to my amazing team at Webamp and to all those who have supported me on my journey.

Webamps mindset and the 10 commandments

Webamps mindset and the 10 commandments

At Webamp we have a clear mindset. We want to create results for our customers by being experts in our field and providing the best possible service. In addition, we also work to create a strong and healthy culture, which is why we have our mindset and our "10 commandments" hanging on the wall. As well as all new employees being handed them out as part of onboarding, we are all reminded of them daily in this way. 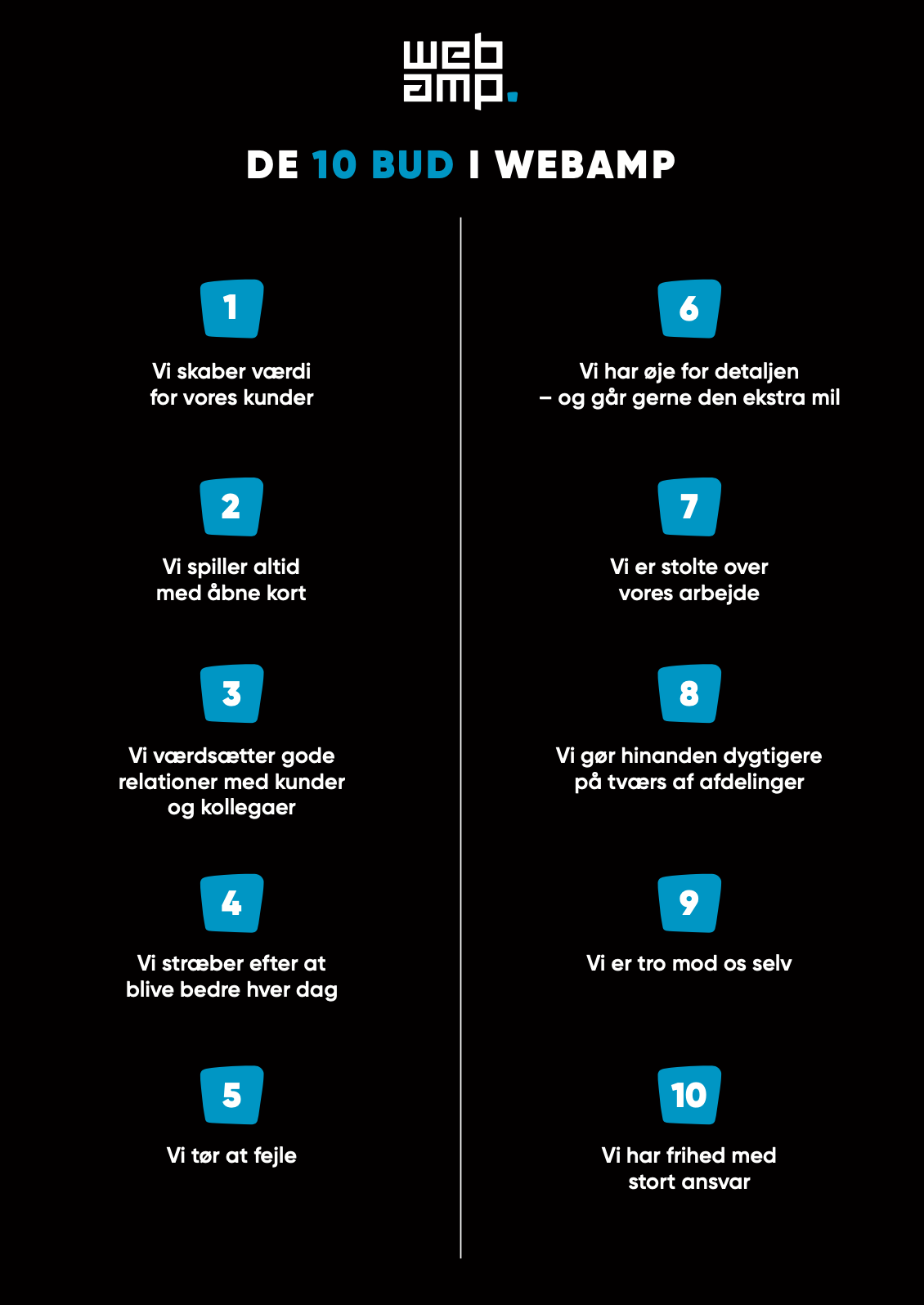 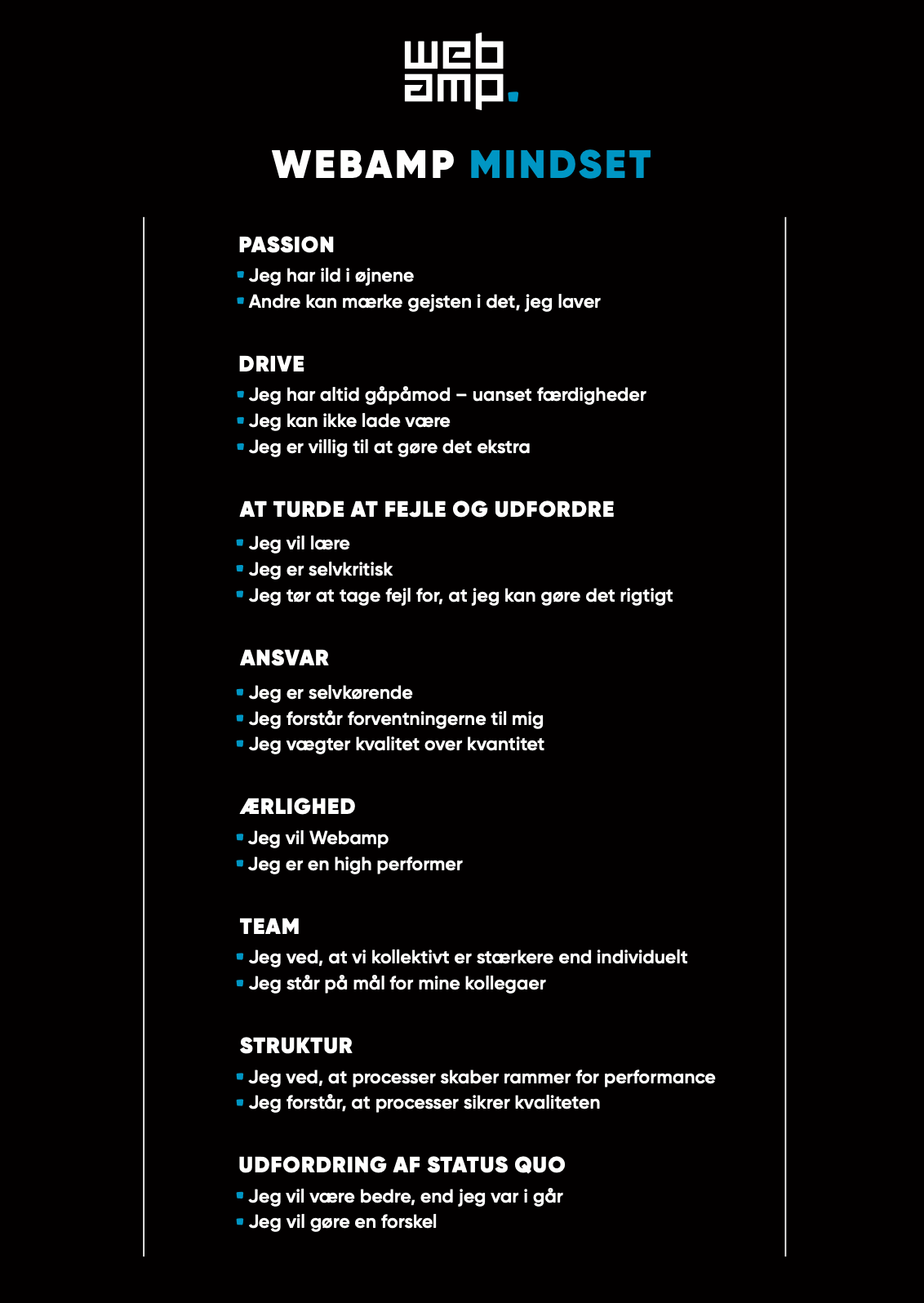 What is the difference? It's big!

At Webamp, we have a culture where team spirit outweighs anything else.

That's why we gather every Friday for the Friday meeting, where everyone votes for a colleague they think deserves to be captain of the week.

At the end of the month, it's time to crown the Colleague of the Month - an honourable title that goes to the employee with the most votes during the month. So it's the other colleagues who decide who is the most valuable colleague - not management.

And that's where the difference between employee of the month and colleague of the month lies. That it's about who adds the most value to the team - and not necessarily about who's best at their job on paper.

Can differences strengthen the common culture?

Can differences strengthen the common culture?

How can we use each other's differences to strengthen the common culture?

Webamp tried to find out on Friday. So at 11 o'clock we shut down the office at Vesterport and drove to the Power Racing Gokart Akademi in an industrial area in Herlev. Here, of course, we had to try the challenging, curvy asphalt track in Denmark's only electric go-karts. But first it was three hours of concentrated DISC-workshop with coach Klaus Veile.

Before the course, all colleagues - from student assistants to directors - took a DISC analysis, which is a profile tool that describes people's behaviour in certain situations. Now it was time to understand the analyses better - and not least to learn how to use them actively in everyday life.

Expectations for the workshop were high among my colleagues. Some hoped for greater self-insight. Others hoped for a better understanding of their environment.

But everyone had one expectation in common: we wanted to learn how to use each other's differences to strengthen both teamwork and performance.

A common plan despite differences

The Olsen Band's plans usually go awry. But is it because the members are so different?

No. This is because none of the four members manages to adapt their communication and behaviour to the personality type of the other members.

On the other hand, a team cannot do without analytical individuals with the golden overview - and here the C's are indispensable pieces. Similarly, the reliable and stable S's are the foundation of good teamwork, just as the optimistic and outgoing I's are the glue that binds the community together.

The four main characters in Olsen Banden haven't understood this, and it's getting in the way of their plans.

Just like the Olsen gang, Webamp is driven by a plan: to provide a sublime customer experience and create transparency in a world that seems abstract and distant to many.

But if that plan is to be realised, our differences must not work against each other.

On the contrary, it is differences that create the basis for a targeted team effort. But this requires everyone to understand why and how other personality types act.

"Someone is making noise in the office. Others prefer noisy silence and therefore work best with a noise cancelling headset around their ears and their eyes focused on the screen."

That's how we describe ourselves on the Webamp careers page. And judging from the DISC analyses, it's probably a very apt description of the dynamics among colleagues at Webamp. There were Ds, Is, Ss and Cs in the workforce.

Webamp has both outgoing and more impulsive personalities who work and thrive on the front line or in the line of fire, and more introverted and systematic employees who prefer stability or structure.

We probably don't need a DISC analysis to figure that out. We interact every day and we know each other's little quirks and differences. But we may not always be good at understanding colleagues who have different profiles to ourselves. And that's exactly what the DISC workshop was designed to teach us.

But in a company where shared culture and respect for the individual must go hand in hand, that understanding is crucial. That's why we learned, among other things:

Finally, everyone was invited to hang their DISC analysis at their workstation. Because this way we can always adapt our behaviour and communication to each other for the benefit of the team and our goals.

After a successful workshop, D's, I's, S's and C's all took to the go-kart track in unison - knowing that the answer to the question "can differences strengthen the common culture?" is a resounding yes!

There are no comments to display.